Unfortunately you have not yet reached the minimum age of 18 years. The sale of alcohol to people under the age of 18 is prohibited in Germany. We take the protection of minors very seriously.

Please visit us again in future.

We would like to make clear that the products offered on this website contain alcohol. We are aware of our responsibility, and marketing our products appropriately is important to us. 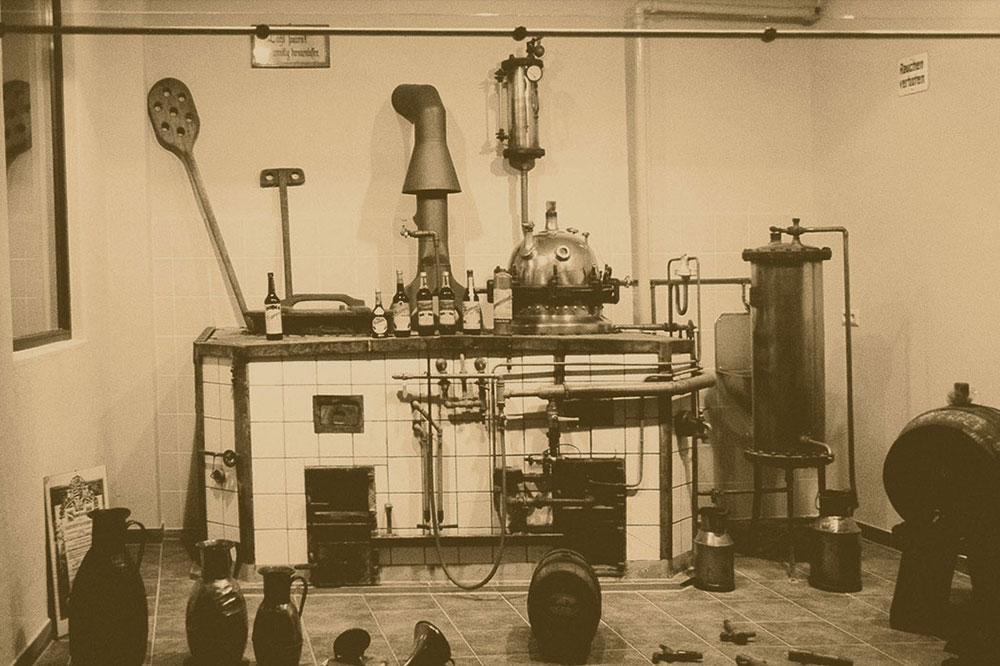 The Radeberger Distillery & Liqueur Factory was founded in 1877 by Wilhelm Richter.

Initially trading under the name “Golden Sun Steam Distillery and Liqueur Factory”, and at the time still declared a “first-rate medicinal bitter”, Original Radeberger Herbal Liqueur most likely reached the Royal Saxon Court as a “stomach-strengthening delicacy”, as documents handed down from generation to generation put it.

This royal seal of approval encouraged Wilhelm Richter to present his noble herbal liqueur at the great exhibitions around the turn of the century, allowing its visitors to taste its unique flavour. Numerous gold medals confirmed this early marketing of quality, as well as customers’ “letters of recognition”, as they were known, which were published in large numbers until the 1920s. An example from 1927 reads: “I take the liberty of expressing my fullest appreciation to the company for the quite excellent quality of the Original Radeberger Herbal Liqueur which they delivered.”

The company founder’s heirs then managed to lead the small liqueur factory as a private enterprise through the turmoil of the wars and through the GDR era. Still family-owned, the lovingly renovated original distillery in Radeberg represents the long and glorious tradition of Original Radeberger Herbal Liqueur. 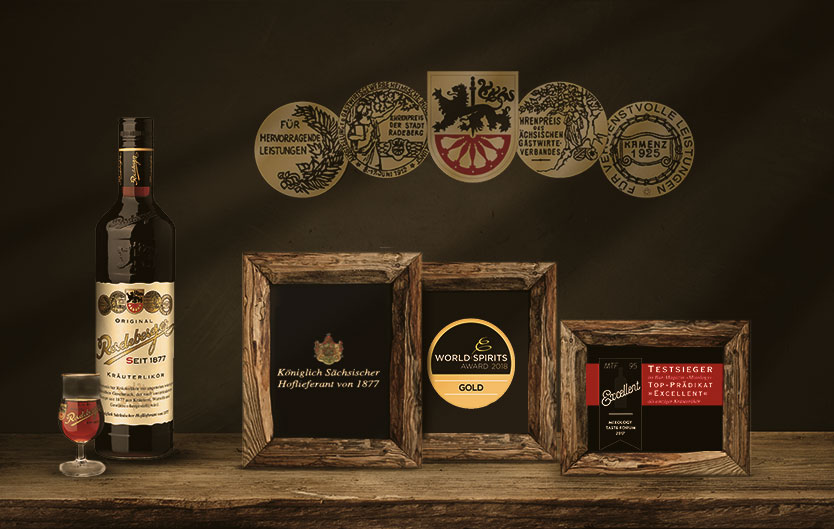 Awards, gold medals and the winning position in comparison tests have all been part of the history of Original Radeberger Herbal Liqueur for over a hundred years. It all began when the “Golden Sun” liqueur factory was appointed as purveyor of the Royal Saxon Court in 1901 – an accolade only granted to manufacturers of particularly exquisite products.

Wherever Original Radeberger Herbal Liqueur faces comparative competition, it is sure to receive a high rating. Its taste and quality consistently convince both local and international judges, winning gold medals once again at the most important competitions in Germany in 2018 and 2019. Original Radeberger Herbal Liqueur came to international recognition when it received the highest awards in Great Britain, the USA and Hong Kong.

The dazzling era of Augustus the Strong (1670–1733), powerful German Elector and King of Poland, established the great cultural and historical importance of Saxony, as well as the many glorious traditions and skills that have been preserved in the Free State to this day.

In the style of the “Sun King” Louis XIV, he commissioned residences and works of art that were on par with the French model of quality and splendour. The European invention of porcelain in Meissen, the magnificent cityscape of Dresden, magical fairytale castles such as the Moritzburg, fantastic gardens and exquisite Saxon art collections – in other words almost the entirety of the region’s rich baroque heritage – would be inconceivable without Augustus the Strong.

Subsequent kings of Saxony never again attained comparable power, and ruled far more modestly. However, in the late 19th and early 20th centuries, one of the privileges enjoyed by the last three Saxon monarchs – King Albert, King George and Frederick Augustus III – was to be able to enjoy a meal with Original Radeberger after festive delights. If Augustus the Strong had known that, he might have had it invented back then...

A Tradition of Manufacturing

Hardly any other region in the world can boast such diversity of high-level manufacturing expertise as Saxony. As early as 1710, the world-famous Meissen Porcelain Manufactory (where Europe’s “white gold” was first invented!) has been an icon of the outstanding skills of Saxon artists and craftsmen.

Since the mid-19th century, precious timepieces from the Saxon watchmaking town of Glashütte – the most important centre for luxury watches alongside Geneva – have enriched Saxony’s reputation as a source of the highest quality products. Nowadays, Volkswagen has put its money in this tradition and established its fascinating “Transparent Factory” (where the VW Phaeton and Bentley luxury cars are built) in Dresden.

Within Saxony, the connoisseur’s town of Radeberg stands for the fulfilment of the highest demands in luxury food delicacies. Whether beer, cheese, meat and sausage products or simply the premium Original Radeberger Herbal Liqueur – Radeberg functions as the region’s gastronomical business card right in the heart of Europe.

“Florence on the Elbe” is the appreciative nickname for one of the most beautiful cities in Europe – Dresden in Saxony. The unique city silhouette, characterised by mighty Elbe bridges and rich, mostly baroque architecture with outstanding buildings, has elevated Dresden to the status of a UNESCO World Heritage City.

From the magnificent courtly architecture of the Zwinger, to the spectacular Semper Opera House and the world-famous rebuilt Frauenkirche as a symbol of Dresden’s regained cultural greatness, visitors to this city encounter living history full of fascination at every turn.

Embedded in an enchanting and varied landscape, Dresden has always welcomed its guests with great charm and cosmopolitanism. The hospitality and friendliness of the Saxons and Dresdeners is legendary – you can experience it most atmospherically in the cosy gastronomy on offer in Dresden’s old town. In true style, in jovial company, and accompanied by Original Radeberger Herbal Liqueur, of course.

The list of high-ranking personalities of contemporary Saxon history is as magnificent as anything else produced by the region. Numerous famous statesmen, poets, philosophers, composers, inventors and painters have left their mark on Saxony’s cultural heritage.

Virtuoso music in particular has become the hallmark of Saxon world class, with Johann Sebastian Bach, Georg Philipp Telemann, Robert Schumann, Felix Mendelssohn Bartholdy and Richard Wagner at the forefront. Poets such as Gotthold Ephraim Lessing, and painters such as Caspar David Friedrich represent Saxonian genius just as much as the pioneering spirit of Johann Friedrich Böttger and August Horch.